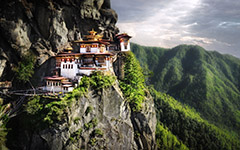 
Day 01: Thimphu Paro Punakhabr
On your trip to Paro, the all encompassing perspectives of the Himalayas are astounding, including the Everest and different acclaimed Himalayan Peaks. The methodology through the Bhutanese foothills and the arrival, including a couple steep swings to arrive at the little airstrip of Paro turns out to be all the more energizing as you enter Bhutan. The drive from Paro to Thimphu is 1.5 hours, Arrival in Thimphu, check in at the hotel, evening free to explore the local area around the hotel. Dinner and overnight at Thimphu hotel.

Day 02: Thimphu Paro Punakhabr
Kuenselphodrang: A spot for reviving with a gigantic statue of Buddha on the highest point of Kuenselphodrang. The range additionally gives a decent perspective of the Thimphu valley from the west.

Folk Heritage Museum: The historical center is stand-out that depicts the way of life of a family in the Thimphu valley in the long time past days. This is a three storied, nineteenth century conventional house giving an understanding to the Bhutanese way of life, and antiquities from the country families. The exhibition hall contains run of the mill Bhutanese family unit items, instruments and types of gear.

Sangaygang view point: : (2685 meters) to have perspective of entire Thimphu valley and stroll through many bright supplication signals that dab the slope sitting above the Thimphu valley.

Takin Reserve Centre. The takin, the national creature of Bhutan can be seen here. This specific creature is discovered just in the Himalayan area Changangkha Monastery: This religious community is based on a slope overlooking the Thimphu valley. It was inherent fifteenth Century by Lama Phajo Drugom Zhipo. Numerous guardians of Thimphu take their new conceived infants to this religious community to be honored by a high lama. Dinner and overnight at Thimphu hotel.

Dochula Pass: the most known go in Bhutan, around 30 km drive from the Capital City Thimphu while in transit to Wangduephodrang. It is at around 3150 mt stature. On a sunny morning, dynamite perspective of the compelling Himalayas mountain reaches can be seen. The pass additionally has 108 Druk Wangyal Khangzang Chhortens which is accepted conveys multi fold legitimacy to every single aware being and which make the pass an unquestionable requirement visit place.

Arrival in Punakha by late evening. Dinner and overnight at Punakha hotel.

Khamsum Yulley Namgyal Chorten: This chorten is based on an edge over the Punakha valley. It took around nine years to construct the chorten. It is said that the Bhutanese skilled workers counseled Holy Scriptures to develop this 4 story sanctuary. The sanctuary was worked by Her Majesty, the Queen Mother Ashi Tshering Yangdon Wangchuck

After lunch, investigate the rustic town in the upper piece of Punakha, appreciate the nature, society and Bhutanese Traditions, associate with the provincial individuals and nearly encounter the Bhutanese lifestyle on the country parts. Dinner and overnight at Punakha hotel.

Royal Botanical Park - Situated at an elevation scope of (2100 meters to 3800 meters) the recreation center covers a region of 47 square kilometers and is situated amongst Thimphu and Punakha. The recreation center contains a rich biodiversity of widely varied vegetation and elements a tremendous types of plants and creatures including jeopardized species, for example, Himalayan yew, local Rhododendron, Royal Bengal Tiger, , Musk Deer, Red Panda, Blood birds and Himalayan Monal. You can likewise discover Tetracentron (an old relict angiosperm with no vessel in its trunk) in the recreation center. The recreation center has 14.5 Kilometers of trails for eco trek for cycling and strolling and one of the primary attractions is the rhododendron garden incorporating an excursion spot with youngsters' play ground.

Rinpung Dzong: Meaning stronghold of the store of gems. The dzong now serves as the managerial and legal seat of Paro area and home for around 200 ministers of Paro and was worked in the meantime of Drukgyel Dzong. The renowned Paro tshechhu celebration is held here in spring.

Ta Dzong: It neglects the Rimpung Dzong and was implicit 1951 as a watch tower. This dzong is Round, more like parts of an European mansion. The Dzong was set up as the National Museum of Bhutan since 1967 and holds intriguing accumulation of expressions, relics, religious thangkha,etc. Dinner and overnight at Paro hotel.

Achieving the top should be justified regardless of the trip; the touch of the Himalayan breeze and perspectives of the valley beneath and sanctuary on the rough bluff might captivate and should give you a chance to feel the genuine opportunity of brain and joy.

Taktshang Monastery; The essential lhakhang was fabricated encompassing Guru Rimpoche's Meditation collapse the 1684 by Gyaltse Tenzin Rabgay. This unbelievable religious community sticks to the edge of a sheer Rock bluff that dives 900 meters into the valley beneath. It is an a few hours outing tough; in any case, one feels genuinely honored achieving the cloister.

Drukgyel Dzong: This dzong is in vestiges now. The Dzong was decimated by flame in 1951 and is currently protected as legacy site. The Dzong is arranged in Drukgyal, ignoring the excellent town with Mount Chomolhari out of sight. The dzong was implicit 1646 by Zhabdrung Nawang Namgyal to recognize triumph over the Tibetan trespassers drove by Mongolion warlord, Gushri Khan.

Kyichu Lhakhang: This sanctuary is one of the most established buddhist sanctuary in Bhutan. The Tibetan King, Songtsen Gompo, to sanctify the whole area of Himalaya, in the seventh century marvelously assembled 108 sanctuaries. Kyichu Lhakhang is thought to be one of them. Dinner and overnight at Paro hotel.